In MMA Manager, each manager maintains a roster of fighters in his gym to send out to fights.

Additional fighters can be recruited by selecting the Recruit option available at the bottom right of the Roster menu.

Managers can create a custom fighter here once the option has been unlocked, but note that there can be a credit cost involved depending on the chosen customisation options. Alternatively, they can select from a lineup of recruits. Managers may refresh the available recruits for a 5 credit cost using the button at the bottom right.

Selecting a fighter then allows the manager to assign the first 25 skill points among the various skills. Once this is done, the fighter can then be recruited.

Selecting a fighter from the roster allows managers to view their vitals, fight statistics, skills, and fight history. They may also adjust the fighter's preferred game plan and select their talents. This is divided into five pages that can be navigated through by swiping left or right.

The first page allows managers to remove a fighter from their roster or edit his or her appearance, name, and vitals in the same way a custom fighter is created, which may also come with the same credit costs.

The fighter's vitals will include their country and city of origin, age, height, weight, and level. The middle of the screen will show the fighter's weight class, win-loss-draw record, and types of victories. The right side shows the types of attacks the fighter has made and defended against in their fights.

The fighter's base skills are shown on the left:

The fight skills are shown on the right:

Usually a sign of physical strength. Gives more momentum and centre of mass.

For a Fighter, this gives advantage in fights, mainly in Grappling or positional-type situations. Weight also determines the  Weightclass of a Fighter. Fighters usually fight in their respective weight range but it is possible to fight with Open Weightclass.

Health is increased with Strength and Talents.

A Fighter usually peaks their in performance at around the age of 23-24.

After 30 you will statistically see a rapid deterioration in their overall performance.

With time, your Fighter will retire. This will leave them unable to continue professional fighting.

However it is not impossible for an older Fighter to make up for their older age, so look out!

The third page allows a manager to adjust a fighter's preferred gameplan. For more information, see gameplans on the Fight page.

You can change a Fighter's Gameplan before a fight.

It will appear right after Fighter info in most matchmaking.

If you enter the fighter info in roster, you also find it to the right.

Be careful with low Initiative when changing tactics.

It affects how much you are attacking. 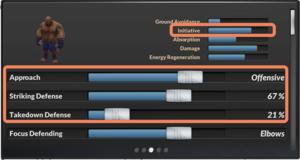 Match the attacks with the Fighter's skill. 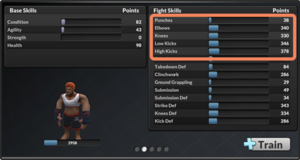 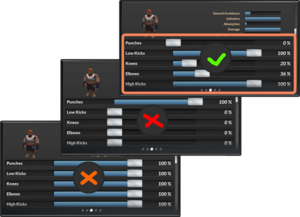 If you like ground fighting, and want to submit your opponents, 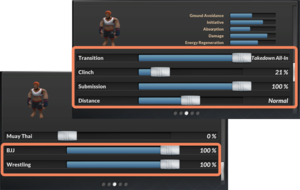 The fourth page shows the history of fights the fighter has participated in.

The fifth page shows the fighter's talents. None are available until the fighter reaches level 3. Additional talent slots are then unlocked at levels 4, 5, 6, 7, and 10.

But a winning Strategy can have any shape, your opponent is still half the part of the fight.

Don't forget to read them.

Make sure the moves you perform fit your Fighter's skills.

Don't choose too many or too few types of attacks, mixing your offence is harder to predict and defend. Always adapt to opponent's preferred attacks and look out for one-trick fighters.

Your physical attributes are very important too, don't forget them. Once you know your talent, try choosing skills that suit it. "Positional" skills must be combined.

Having a good Clinch boosts your elbows and knees strategy.

Plan your Trainer purchase. Having low defensive skills is a big risk. Going almost max in 1,2 skills is a good tip to gain an edge.

Talents are very situational, but one of the strongest edge in a strategy if played right. Combine with supporting skills and gameplan to amplify the effect. You can change active talents in the Fighter menu.

Not adapting to your opponent[edit | edit source]

There is no reason not to evaluate your strategy each fight.

Not having any defence[edit | edit source]

It is a big risk and it will not fair well for you.

An offensive opponent could still be better in a skill and or attack than you in your defence, if they have an edgy strategy, you better watch out.

Go super defensive in their speciality and try to aim for points/counter.

Your attacks will most likely not benefit from your opponent's weakness.

Missing out on multiplying effect from layers of strategy.

It is harder to utilise all in one fight.

Less likely to have a strong offence, making your opponent able to only make one attack where they are still significantly stronger.

Low Initiative means you are less likely to be the one attacking, falling too low on initiative will eventually leave more room for the opponent,

Defensive strategies and failing attacks can decrease initiative or good opponents could gain initiative when you open up.

Always train Strength and watch your Health. Train Condition and don't be offensive if your Fighter can't handle it and runs out of Energy. en:Fighter