Fights in MMA Manager are matches between two fighters from different gyms.

Quick fights are a multiplayer mode that pits a couple of players against each other in isolated matches.

Campaign is the game's single player mode, offering rewards for matches against fighters from various predefined gyms, each one ending in a boss fight.

Wins, losses, and draws from campaign fights are not recorded in a fighter's fight statistics.

A multiplayer mode where player's compete in an tournament-style competition.

A multiplayer mode that pits the fighters of two gyms against each other. 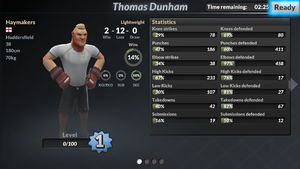 Before a fight begins, managers have the chance of viewing their opponent's vitals and statistics. Once the manager selects Fight and chooses a fighter, there is a limited time available for the manager to adjust the fighter's gameplan. Talents are also accessible at this time.

The fighter's gameplan is the tactics he or she will use in a fight. The fighter's preferred, or default, gameplan can be set in the roster menu while at the gym, but the pre-fight gives a manager a chance to try to tailor the gameplan to the opponent. The fight statistics should offer some clue as to the opponent's strengths and weaknesses, though if the opponent hasn't been in fights yet, these stats will be a blank slate. Gameplans are divided into four pages which are scrolled between by swiping up and down. 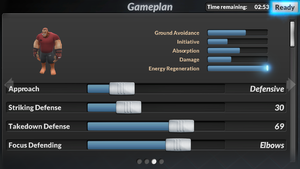 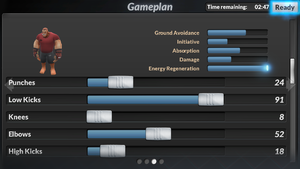 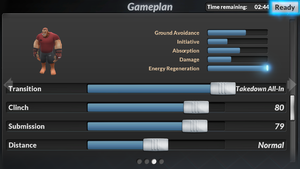 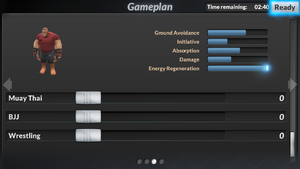 Once a round begins, it is all up to the fighters to execute their gameplans and hopefully defeat their opponent. Managers can only sit back and watch during a round.

This article is a stub. You can help MMA Manager Wiki by expanding it.